Confined Space Safety Checklist - 5 things to look out for 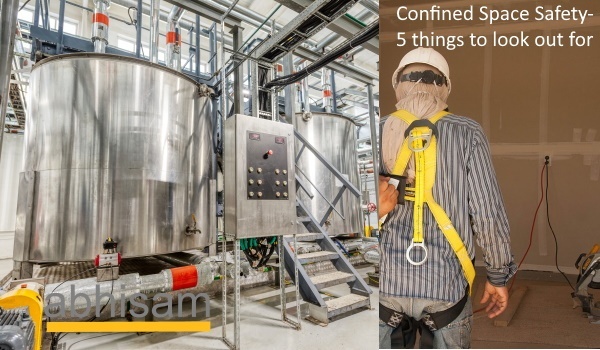 The US Occupational Safety and Health Administration (OSHA) is the regulatory authority in the US regarding workplace safety and regularly publishes guidelines and norms to be followed to ensure safety in workplaces.

One of the biggest workplace hazards today in the US as also elsewhere in the world, are confined spaces. These pose a unique hazard, because unfortunately many workers, their supervisors and managers are unaware of what constitutes a confined space and the possible dangers of not following norms associated with them. They tend to severely underestimate these hazards, which pose a threat to life. A lot of fatalities then result. OSHA regularly publishes data about various accidents and incidents in different workplaces in the US.

Based on this published data we will now look, at three incidences of mishaps involving confined spaces recently. These incidents show that employees and their colleagues are not aware of these dangers at all.

On May 5, 2018, Employee #1 was retrieving a plastic liner bag from a chemical container that had fallen into Reactor CP-2; a confined space. The permitting process, including air monitoring and setting up of ventilation, had not been conducted. As Employee #1 descended a ladder to access the reactor, he passed out at the first rung and fell to the bottom of the reactor. A coworker, who witnessed Employee#1 enter the space, contacted the control room to notify them of the incident. Emergency services were contacted and, upon arrival, recovered Employee #1 from the reactor. Employee #1 was determined dead. Air monitoring conducted by emergency services, following the incident, showed an oxygen concentration of eleven percent.

From this incident, we can say that in all probability, Employee #1 took the decision to enter a confined space without knowledge of authorization or permit requirement, since he was not aware of confined spaces, risks associated with them and the safety permit requirements. He went on to enter the reactor directly without having a proper permit, no air quality testing and/or any setting up of a ventilation system and attendant outside the reactor. Apparently, a ladder was arranged by him, but no other safety equipment was called for.

At 9:00 a.m. on December 15, 2017, an employee was cleaning the excess oil from the bottom of a tanker rail car following a previous application of oil to prevent corrosion. The employee collapsed due to a 98% atmosphere of nitrogen being present inside the tank car. The employee was killed due to asphyxiation.

From the incident, we can say that the employee entered the tanker rail car directly without asking anybody, since he was unaware of the danger of entering a closed space which was not monitored. He assumed that breathable air is present inside the rail car. We can say that he took the decision of entry without knowing that he was not authorized to do so. He did not identify the permit required confined space and hence did not take any precautions.

At 11:00 a.m. on July 7, 2017, Employee #1was attempting to dislodge a 24 inch rubber plug from a 2 foot diameter sewer pipe, located inside a 24 foot deep wet well. The workers were outside the well, pulling on a 1/4-inch nylon rope that was attached to the 24-inch diameter plug. The plug was lodged inside a T-shaped PVC fitting from the force of the waste water emptying into the well. Without conducting any atmospheric testing of the work space, Employee #1 climbed down the ladder with a crowbar, to dislodge the deflated 24 inch diameter rubber plug, which was about 8 feet below the top of the well. He had difficulty releasing the plug with the crowbar and started to make his way up the ladder. He lost consciousness, when he was about 2 feet from the top of the well and fell into the 24 foot deep well. Employee #2 descended down the ladder to provide emergency rescue, but he too lost consciousness and went underwater. The waste water level was about 3 feet deep at this point. Employee #3 climbed down the ladder to provide emergency rescue, but lost consciousness as well. All three workers were asphyxiated by hydrogen sulfide (H2S) gas.

In this case all the three employees were not aware of risks of entering a confined space; or we can assume that they did not realize that they were doing activities which were abnormal. They were totally unaware of risks of confined space. They could not identify the confined space and did not take necessary precautions of testing the atmosphere, having rescue equipment, having SCBA (Self Contained Breathing Apparatus) and proper permit to perform their duties.

Learning from the three cases

From all the three cases, it is clear that the workers were not aware of confined space and risks associated. Also, they did not know that they were taking decisions of entry which they were not authorized to take.

How do we prevent such mishaps?

Let us first understand what is a confined space.  OSHA has defined it as below

■ is not designed for continuous occupancy by the employee; and

■ has a limited or restricted means of entry or exit.

We can see many situations of enclosed spaces in our workplaces and even outside and check whether they are confined spaces are not. Take an example of a ‘car’. A car satisfies the three conditions as given in the definition. It is large enough to enter and has a limited or restricted means of entry or exit. However; it is designed for continuous occupancy of several hours. This is with the condition that there is proper ventilation and air conditioning system functions well, with sufficient fresh air intake from outside. In case, the air conditioning system fails, or the fresh air intake vane is closed, then a car becomes confined space and there are several cases of deaths of the occupants in a locked down car.

There is also a case of a closed room or underground cabin which was not used for years. The atmosphere inside the room was alright when it was closed but when you want to enter such a room or cabin, it is better to be cautious and treat it as permit required confined space (PRCS)

Therefore PRCS is a time dependent phenomenon as well.

To enter into a confined space, if you require special equipment or tool, definitely you have to consider it as PRCS. Thus ‘use of special tools’ is yet another criterion for confined spaces.

To prevent confined space accidents in your workplace, the first step is to train your employees, supervisors, managers and contractors about the hazards of confined spaces. The easiest way of doing this is by taking an online course in Confined Space Safety, as for example, the one by Abhisam.

The advantage is that a large number of people can be trained effectively, quickly and comprehensively, with all training records available.  This is because Abhisam’s Learning Management System (LMS) can export a training record for every employee who has undergone any kind of online training on the Abhisam LMS. This meets your training as well as compliance needs. The same training can be given again and again every year (refresher training) and you can get separate records for these sessions as well. The training can be accessed on your laptop, tablet or smartphone from any location that has internet connectivity.

The second step is by asking people to follow the Abhisam Confined Space checklist given below. Print it out and post it on your Notice Board or Cafeteria white board, so that people are aware.

The five point checklist to identify confined spaces is given below: 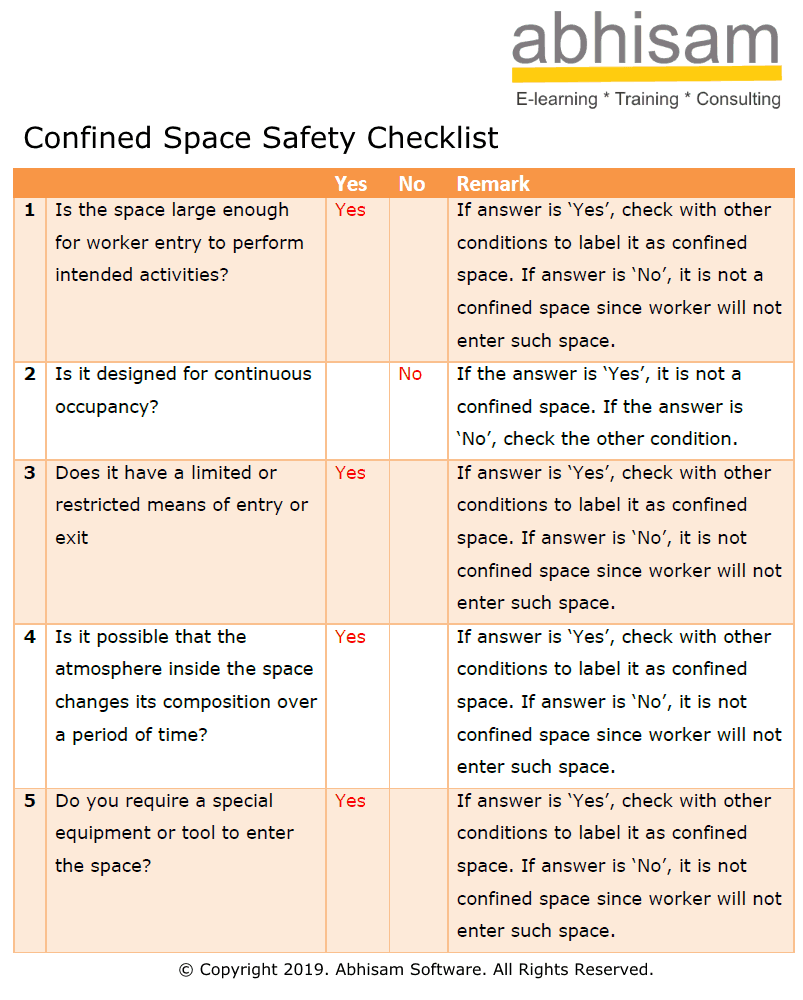 In the above 5 checkpoints, if all checkpoints except checkpoint 2 gives answer ‘Yes”, the space is to be considered as confined space. Any entry in such space has to be done with all the necessary measures such as atmospheric monitoring, stopping energy input, rescue equipment and proper authorized permit.

Confined Spaces are hazardous and work inside them has to be managed appropriately, with the help of OSHA norms and standards, to prevent injuries and fatalities to workers. Conducting frequent awareness training programs about confined space entry OR by enabling workers to access such training programs online and following the checklist given above, should drastically reduce or eliminate such accidents. Remember, each and every confined space accident is preventable. To know more about confined space safety training, please take our e-learning course

Take this online Confined Space Safety training from Abhisam and get certified. Course contents are as per OSHA.