By now if you have been working in the process industries (like chemicals, oil & gas, petrochemicals and so on) for some time, you must have come across the term HIPPS. What is it? It is an acronym for High Integrity Pressure Protection Systems. These high pressure protection systems can be considered to a special subset of Safety Instrumented Systems , that are meant to provide protection to pressurized equipment (tanks, pipelines and so on) against overpressure and consequent rupture due to the high pressure (beyond rated limits). This kind of High Integrity Pressure Protection System was developed as an alternative to traditional overpressure relief systems.

Prior to the advent of HIPPS, a typical high pressure protection system for equipment was implemented using two main devices, rupture disks (also known as burst disks) and safety relief valves. Actually, there are three methods of high pressure protection, namely the burst disk, the relief valve and the third method uses a combination of the first two along with a pressure switch, pressure transmitter or sometimes even a pressure gauge. These even today form the bulk of relief systems used in the process industry today.

The burst disk, as the name suggests, is a contraption that bursts under high pressure conditions, to release the pressure inside the equipment on which it is mounted and protect the equipment itself from bursting. Therefore the burst disk always bursts at a slightly lower pressure than the equipment's design pressure. Conceptually, it is similar to a fuse that blows in an electrical circuit if excess current flows in the circuit. The fuse gets destroyed but the other expensive and/or critical electrical/electronic devices in the circuit are protected.

Combination of Rupture Disk and PRV

The third method is a combination of the two devices, a rupture disk and a mechanical safety relief valve. The selection is done such that the rupture disk bursts first (at a certain pressure). The outlet part of this is connected to a pressure switch or a pressure transmitter, that sends an alarm signal to the control room indicating that the rupture disk has burst. The operator is supposed to respond, to tackle the excess pressure in the system. If he does not, or cannot then, when the pressure becomes higher the mechanical relief valve gets actuated.

The traditional methods have worked for a number of years successfully. In fact most plants today use MAINLY the above two methods of pressure protection for equipment. Of course many plants do have pressure transmitters and pressure switches to generate alarms in case of excess pressures, but they are mainly meant for operator intervention and not for automatic pressure relief.

Despite the fact that these traditional methods form the bulk of overpressure protection, does not mean that that users are very happy with them. There are several drawbacks in these methods; these are given below:

a) Modifications in existing plants-lack of flare capacity
Many times, expansion or debottlenecking projects in plants do not correctly estimate the additional load on flare systems, due to increased throughput. This point only comes up during the HAZOP and other safety and environmental studies. The increased investment in flare headers and the shutdowns that may be necessary to increase the flare capacity, are simply not possible in today's tight economic situations. This is where HIPPS is an alternative. Instead of merely venting the gases to relieve overpressure, a fast acting HIPPS simply shuts down the inlet valves to prevent overpressure from building up in the first place.

b) Environmental Release & Personnel Injury
If a burst disk or relief valve opens, it may discharge environmentally unfriendly substances into the surrounding air, leading to consequential problems of spillage, pollution, environmental damage or personnel injury. In many older plants, many processes are still operated manually which means more humans are working around pressure vessels. Any release of flammable or toxic contents into the surroundings may also endanger the personnel working in the area.

c) Fire and Explosion
If the released material is an explosive material then releasing large quantities of it through relieving devices can increase the risk of fire or explosion. It may also endanger the personnel who may rush to that area to replace the burst disk.


d) Replacement problems
When a burst disk operates, the equipment of part of the pipline gets shutdown. Replacing it and starting the plant again entails a lot of use of resources. Sometimes, it is challenging to find out why a burst disk burst at a particular time and place. Nowadays many times the third method is used (combination of rupture disk, relief valve and pressure switch) . Even then, it may be difficult to find the root cause of the bursting. It may be due to a genuine overpressure condition, or it may be that the particular burst disk operated a slightly lower pressure than it was designed to-it is difficult to pinpoint. Not all rupture disks operate at the exact pressure that they are designed to burst at.

To avoid all these problems, users today are now actively accepting the HIPPS design as an alternative. A typical HIPPS is shown below. In case of overpressure in the line, the quick shutoff valves close the line in a matter of seconds, preventing the  high pressure condition from traveling further downstream.The system consists of multiple redundant pressure transmitters, often in a voting arrangement. It could be a 2oo3 voting arrangement for example. These are connected to a safety logic solver, that is designed in accordance with international standards like IEC 61508. This logic solver also may be in a redundant arrangement with many possible configurations such as 2oo3 or 2oo4 voting logic. This safety logic solver has a high integrity (typically SIL 3). This then controls at least two or more quick action shutoff valves, via pneumatic or electropneumatic or electrohydraulic actuators that operate tight shutoff valves. The sensor/ pressure transmitter, actuators, final control elements like valves all have to comply with IEC 61508 and should have high integrity, as these systems are installed in critical applications in the process industry such as offshore platforms, onshore oilfields, subsea pipelines and in petroleum refining, gas processing and chemical plants. Note that  a HIPPS  can be considered as a special case of a Safety Instrumented System. These systems can have Safety Integrity Level ratings pretty high, like SIL 3 or even SIL 4. This is because the risk reduction that is sought to be achieved by using these are very high.

Note: Below HIPPS schematic is created and copyrighted by Abhisam. Do not use without permission! 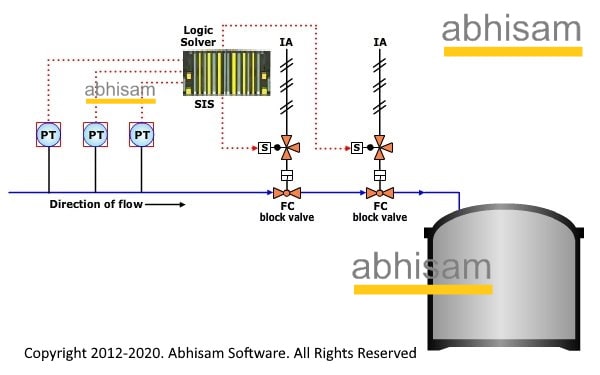 A HIPPS is a special kind of Safety Instrumented System. To know more, please get our e-learning course now.

After the FAT (factory acceptance test) the HIPPS has to be validated at site before commissioning. It should also be proof tested regularly, as per the calculated mission times, in order to ensure that it continues to be in the reliability band of the designated SIL. Sometimes it may not be possible to carry out full proof tests due to plant shutdown cycles being long. In these cases partial stroke testing may be carried out to ensure that the system will function on demand. However the frequency must be backed up with appropriate calculations to justify the period.

SIL Certification for the HIPPS

How do you know that the HIPPS that has been supplied to you is reliable, meets all requirements of the standards? It will be a massive exercise for any end user or even engineering consultant, to do this due to the complexity of the technology.  Such systems therefore undergo a SIL certification exercise by trusted third parties, who will carry out the due diligence for you. They will examine the entire safety loop, determine if it meets the target . SIL. Note that the entire loop must satisfy the criteria for meeting the target SIL, not just the logic solver or the individual instruments like the pressure transmitter or final element.

These safety systems are now being increasingly used in the process industry. However one should consider the cost-benefit analysis of using them, since they are several times expensive as compared to traditional mechanical relief systems.

Note: We value your Privacy. We do not reveal your data to third parties.

Our Safety Instrumented Systems e-learning Course, is the best online course out there covering Hazard and Risk Assessment, Failures and Reliability, international functional safety standards, Safety Integrity Level (SIL) determination and verification calculations, proof testing, design of HIPPS (High Integrity Pressure Protection Systems) and much more! Plus get a free Certificate of Competency too, plus your electronic badge, when you take our exam and pass! 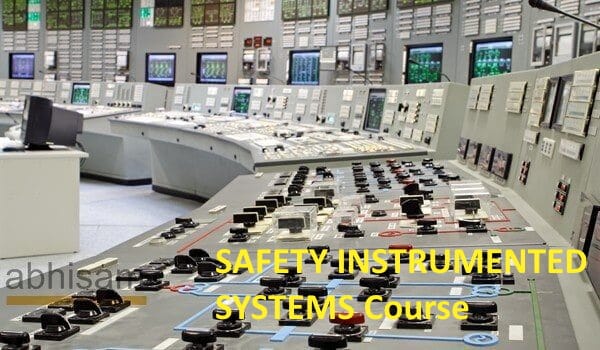