The event took place at the MCCIA Trade Tower on Senapati Bapat Road, which was attended by engineers working in companies like Emerson, Honeywell and others. It was an intensive one day program that squeezed in a large amount of knowledge in one day and was meant for busy professionals, who cannot spare time for the regular two day workshop. All participants will receive the Abhisam IIoT Ninja badge, signifying that they have started their Industrial Internet of Things journey, that will take them places.

The Industrial Internet  is a large part of the much discussed Internet of Things (IoT), which is an enabling technology that connects devices and things to the internet, thereby unlocking a lot of value. The Industrial IoT is also variously described as IIoT, Industrie 4.0 and Digitalisation. They refer to the same phenomenon, which is making dumb devices and machines smarter, connecting them to platforms that can then derive a lot of value out of the humungous amounts of data that is collected.

This workshop covered all the basics right from what is the Industrial IoT, upto designing and making your own IIoT device.A valve simulator that was designed and made inhouse by Abhisam, for the purpose of the training was demonstrated. This was connected to the Microsoft Azure cloud platform and the data exchange, monitoring and control was also demonstrated. Similar cloud platforms that enable IIoT were also discussed including using Amazon AWS, Google IoT Cloud and SAP’s Leonardo.

It covered major IoT protocols such as MQTT in depth, its supriority to using simply https and also aspects related to cybersecurity. It helped participants realize that although IEC 62443 is thought to be the main cyber security standard for industrial systems, it is merely the starting point, since the field device communications that use Fieldbus technology or HART or Modbus are not really secure from the ground up. The Industrial IoT architecture can change all that and result in a much stronger industrial cybersecurity enabled architecture, that can be massively scaled up. Some scenarios with regards to streaming analytics and dashboards were also discussed. 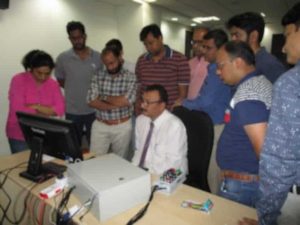 A vibration monitoring device to monitor vibrations of machinery such as motors, compressors and other rotating equipment was also demonstrated, alongwith analytics for it and AI based predictive manintenance.

The size of the Digitalization and IIoT market is said to be in the trillions by various different consulting firms, which means it is a great opportunity for Industrial Automation vendors. It will impact all traditional vendors of DCS, PLC, SCADA and even SIS.

All the participants were very happy with the workshop, although a common complaint was the limited time at their disposal (one day). It was however appreciated by them, that the topic is vast and there are other options of attending the two day regular workshop  as well as advanced workshops that will have a deep dive into the technology.

Would you like to know more about Digitalization, the Industrial IoT and Industrie 4.0? Then join us at our next workshop, to be announced soon. Better still, get in touch with us to arrange one in your own city or workplace. Our experts can travel at short notice to any location.